Milan (and Italy) do not stop

dear *****
considering that during the entire past year (2019) we have submitted you many many quotes and not one single order has been entrusted to us, and considering that preparing a quote is meaning work and time and costs, and we cannot continue to work for “nothing”, we have decided NOT to grant any more quote for FREE.
We are prepared to dedicate our time and efforts and work to study the possible solution and submit a proper detailed quote against payment of 250 euros which will be reimboursed if the shipment will be entrusted to us.
Please authorize us to issue the invoice for euro 250 and we will start working on your request immy.
It goes without saying that if the order will be NOT confirmed, the euro 250 will have definitely to be paid to us within 30 days from today.
Please confirm in order to proceed.
Thanks for your understanding.
Paolo Federici

I just got a report from Will Beacham, Deputy Editor, ICIS Chemical Business.

As the threat of further military action in the Middle East looms large – disruptions in the Strait of Hormuz could seriously impact the global trade in chemicals and oil products.

For chemical markets already in oversupply, such as polyolefins and isocyanates, any supply shock from the Middle East will have little impact. For others, such as Low-density PE (LDPE), where 68% of global net exports – 3.1m tonnes – come through the Strait, supply risk is far greater.

The attached analysis from Will Beacham, Deputy Editor, ICIS Chemical Business looks at the products that are heavily exposed to disruptions and the knock-on effects for the world’s already fragile manufacturing economy.

Here the full report issued by Will:

Military action leading to closure of the Strait of Hormuz between Iran and Saudi Arabia could seriously disrupt global trade in chemicals and oil products, with a knock-on effect for the world’s already fragile manufacturing economy.

The US killing of General Qasem Soleimani, head of the Iranian Revolutionary Guards’ overseas forces, on 3 January 2020 threatens to further stoke up tensions in the Middle East. Iran retaliated on 8 January with missile strikes against US forces in Iraq.

The Strait of Hormuz is an important shipping lane, linking Middle East oil and chemical exporters to the rest of the world. More than 20% of global petroleum liquids and a significant proportion of chemicals are transported through the Strait.

According to ICIS senior consultant, Asia, John Richardson, quoting ICIS Supply & Demand database forecasts for polyolefins exports in 2020, this includes 4.1m tonnes of Middle East high-density polyethylene (HDPE) production due to be exported via the Strait.

This accounts for 38% of total global net exports amongst all the regions that are in net export positions – where exports are higher than imports.

Supply risk is greater in linear low density polyethylene (LLDPE) where 51% of global net exports – 4.7m tonnes – appears to be exposed. Low-density PE (LDPE) is most at risk, with Middle East exports via the Strait accounting for 3.1m tonnes of net exports, 68% of the global total.

Other important products heavily exposed to disruption to shipping in the Strait of Hormuz include monoethylene glycol (MEG), ethylene and methanol.

In an all-out war scenario the Strait could close completely, cutting off regional chemical exports for a prolonged period. A lesser conflict could lead to periodic disruption to traffic through the Strait.

For chemical markets already in oversupply, such as polyolefins, isocyanates and MEG, any supply shock from the Middle East will have less impact as capacities elsewhere can be ramped up in response. This happened after the attack on a Saudi Arabian oil processing facility in September 2019 which cut feedstock supplies to regional chemical facilities.

This chart shows the most potentially impacted chemicals in terms of percentage of global production capacity. 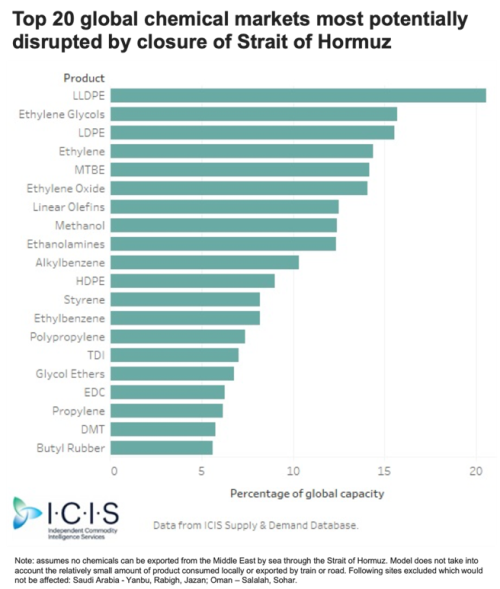 Oil prices spiked 5% to more than $70bbl following the US attack and Iran’s response before dropping back slightly. They remain well above levels prior to the incident.

Higher oil prices act as a brake on consumer spending, so any sustained hike is likely to hurt global economic growth. The manufacturing economy is already fragile, with purchasing managers indices in negative territory for the US and Europe.

Business and consumer sentiment soured during 2019 as the US-China trade war deepened and growth slowed in major economies. This is likely to be hurt further by any Middle East conflict.

“The demand side remains very weak for manufactured goods with pessimism high and investment low. The potential for conflict will further dampen global producers desire to invest. Higher raw material prices will thin margins as producers struggle to pass this through the chain. Any consumer price increases could soften end market demand, at a fragile time.”

According to Richardson, ethylene and PE variable cost margins for naphtha-based crackers in northeast Asia fell throughout 2019 and in December hit minus $90/tonne, the lowest since ICIS records began in 2000. Higher oil prices would squeeze these further whilst demand is suffering because of increased US supply to the region.

Unusually, benzene spreads were also below $100/tonne for six months in 2019.

“Higher oil prices will act as a tax on the economy, reduce economic growth and make life worse for petrochemical producers. I think that is probably the bigger story than any interruption to supply,” he added.

International eChem chairman Paul Hodges, is concerned about the additional uncertainty that this development will create for the chemical industry.

“Companies are already worried about the downturn in margins caused by the slowdown in the global economy, the rise of protectionism and the relatively high cost of oil,” he said. The risk now is that worries over availability lead to a period of higher prices caused by panic buying, and that these can’t then be passed through to end-users due to softening demand.”

He believes that any threat to the Strait of Hormuz would almost certainly plunge the global economy into outright recession, given the likely impact on oil market supply and prices.

With the conflict unlikely to be resolved quickly, Hodges urges chief executives to focus on contingency planning rather than just assuming they can rely on ‘business as usual’, particularly with the International Monetary Fund already warning that the global economy is in a “precarious” position.

by J.J. Abrams and Doug Dorst

Vivere per viaggiare, viaggiare per vivere...